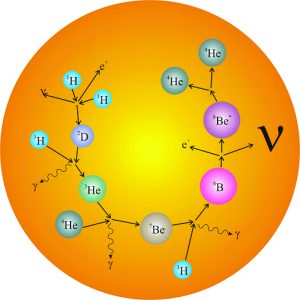 The deployment of new ground-based and satellite-based observatories, including the Hubble space telescope, has led to an explosion of information in astrophysics over the past decade, ranging from a glimpse at the earliest events in our universe to details about the continual evolution in stellar systems that surround us. Popular cosmology theories tell us that, within an instant after the Big Bang, nuclear synthesis has driven the evolution of the universe. To understand this evolution, we require information about a wide range of nuclear reactions, many of which involve an unstable nucleus capturing a proton or an alpha particle and transmuting to a new unstable nucleus. Until the recent advent of radioactive ion beams, any study of these reactions in the laboratory has been nearly impossible. We are using radioactive beams in the MARS spectrometer to learn more about some of the important nuclear reactions governing the behavior and evolution of our own sun and other stars. Combining radioactive-beam induced reactions with conventional nuclear physics techniques, we are measuring reaction rates for proton-capture reactions such as 7Be(p,γ)8B, which is the sole source of high energy neutrinos from our sun.

University of Strasbourg and CNRS-IPHC