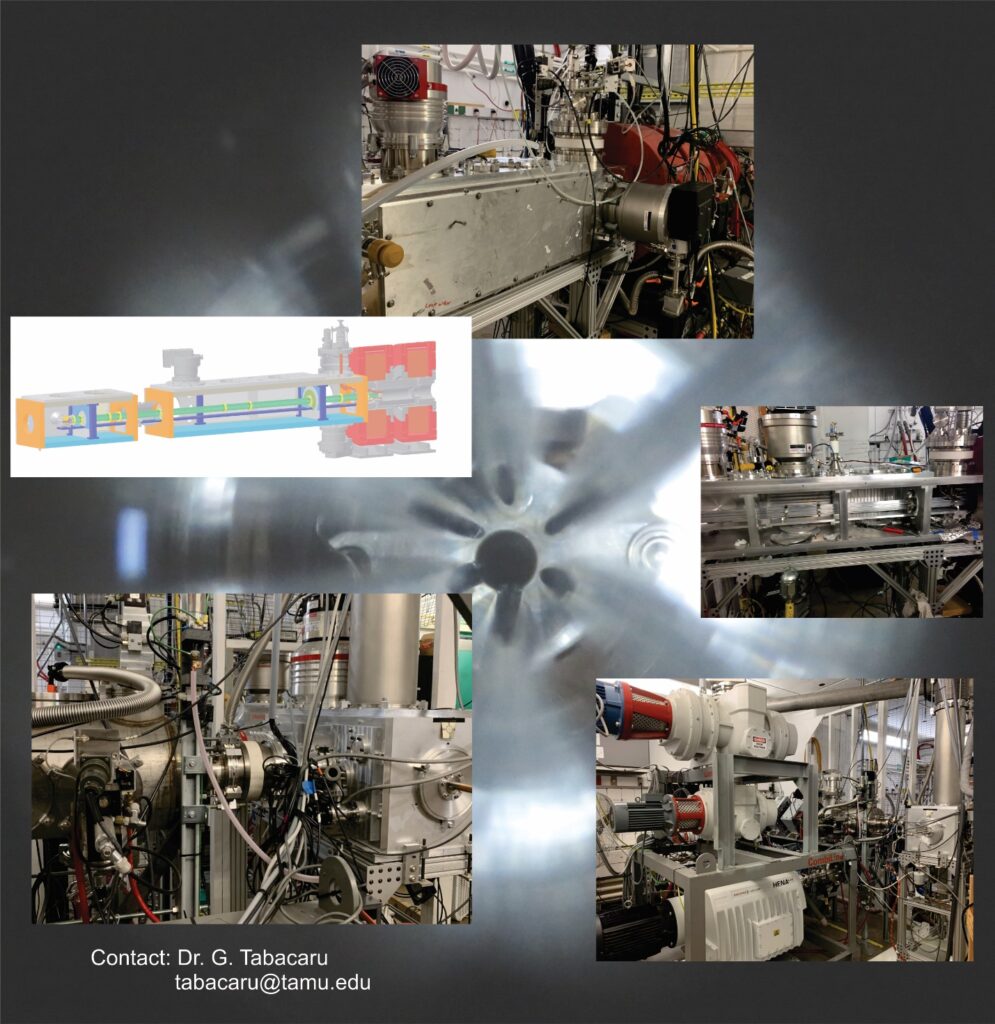 Texas A&M University is currently configuring a scheme for the production of radioactive-ion beams that incorporates a Light Ion Guide (LIG) coupled with an ECR Ion Source (ECRIS) constructed for charge-breeding (CB-ECRIS). This scheme is part of an upgrade to the Cyclotron Institute and is intended to produce radioactive beams suitable for injection into the K500 superconducting cyclotron.

The Light-Ion Guide (LIG) will produce radioactive species mainly from (p,xn) reactions. The primary beam (protons with energy around 30 MeV) interacts with a production target (e.g. 27Al) placed in a gas cell. Inside the gas cell, helium gas is flowing continuously at constant pressure of 100 mbar maximum. The recoil ions [e.g. 27Si from 27Al(p,n)27Si)] are thermalized in the buffer gas and ejected at a 90° direction (with respect to the proton beam direction) through a small exit hole. All ions mainly 1+ charge state created in the gas cell are collected and transported by a RF-only sextupole: a resonant structure similar to the RFQ in a residual gas analyzer. The large flow of helium gas is evacuated by a differential pumping system. The ions are then injected into the Charge-Breeding ECRIS (CB-ECRIS) source which will ionize them to higher charge states. The radioactive species are injected into the K500 Cyclotron and re-accelerated. The primary beam (proton beam) will exit the gas cell and will be stopped in the beam dump.

Several configurations were tested to transport radioactive ions from the gas to the CB-ECRIS. The best solution chosen consist in a 2.5 m long RF-only sextupole with three vacuum barriers. The helium gas is evacuated gradually using Roots blowers and turbo molecular pumps. A vacuum of 2× 10-7 Torr is attained at the entrance of the CB-ECRIS.

The ions entering the RF-only sextupole are confined and transported without a loss, following a trajectory as depicted in the image below.

Once the 1+ ions injected inside the CB-ECRIS they suffer multiple ionizations and their charge states increase significantly. The higher charge states are extracted and only one, precisely selected, is transported to the K500 for further re-acceleration.

The tuning and debugging of the system is initially made with a stable alkali ion source: rubidium, or cesium, or potassium. Excellent charge breeding efficiency was achieved up to 40 %. However, there is no helium gas involved in this process. To tune the system operating in similar conditions using the proton beam, we used a 228Th open source. The daughters (220Rn, 216Po) from the decay of the 228Th were injected and charge breed.

The table below is a list of our developed radioactive beams. We developed other beams not listed here, but their production, for the moment, is low make them too difficult to re-accelerate.