The standard model (SM) of particle physics has been spectacularly – and stubbornly – successful over the past half century at describing the fundamental particles and their interactions. Predictions of the SM have been confirmed over and over by increasingly sophisticated and sensitive experiments in particle, nuclear and atomic physics. And yet, there are many compelling reasons to search for physics beyond the SM (“BSM physics”) and develop a model that more completely describes Nature. As a few examples, the SM: does not describe dark matter nor dark energy; cannot explain the extreme matter-antimatter asymmetry of the universe; and has thus far withstood all efforts to integrate a quantum theory of gravity. In addition, a number of aspects of the SM seem contrived hinting that we lack a deeper understanding. Why are the masses what they are? Why are there 3 generations of quarks and leptons? Why is the weak interaction the only force that violates parity and is this violation maximal? Why does CP violation seem unnaturally small? Clearly, we must continue to investigate these issues to find the answers to these most fundamental questions about our universe.

At the Cyclotron Institute, we pursue nuclear physics experiments at the low-energy precision frontier, complementing searches for BSM physics being performed at large colliders such as the Large Hadron Collider. Neutral atom and ion traps provide an ideal source of short-lived β-decaying nuclei. The nuclear recoil escapes freely from the trap (i.e. there is no backing material), and its momentum and that of the β can be measured, so the neutrino momentum can be determined. Furthermore, the nuclei can be spin-polarized by atomic optical-pumping methods to an extremely high degree, and can be probed by atomic methods independent of the nuclear decay. Correlation experiments set stringent limits on potential scalar and tensor weak currents, and can also be used to constrain more exotic physics. The Cyclotron Institute is home to TAMUTRAP, the world’s largest Penning trap which was developed to measure the β-delayed proton decays of extremely proton-rich isotopes. We have demonstrated our unique trap is able to measure masses to better than a part per million as we develop the radioactive ion beams needed for the decay program. 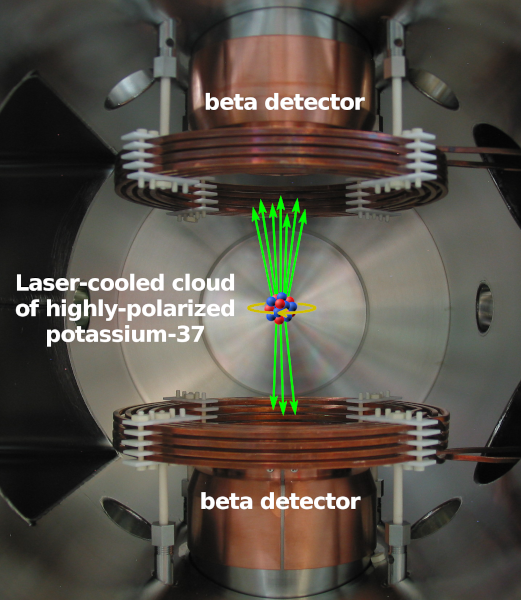 Among the tantalizing indications of BSM physics is a hint that the Cabibbo-Kobayashi-Maskawa (CKM) quark-mixing matrix may not be unitary as required by the SM. Precision measurements of the comparative half-lives (or ft values) of certain β decaying nuclei provide demanding tests of the Standard Model. Such measurements have, for example, most stringently confirmed the conserved vector current (CVC) hypothesis, have set the strongest limits on fundamental weak scalar interactions, and provide the most precise determination of Vud, by far the largest element of the CKM matrix. Recent theoretical developments have created significant tension for the unitarity of the CKM matrix, providing a strong motivation to measure more ft values as well as other ancillary observables to aid in theoretical calculations. Using the fast-tape transport system and the world’s most precisely calibrated HPGe detector for absolute efficiency, the Cyclotron Institute continues to contribute to the global effort of better determining Vud.

Inspired by the ground-breaking work of Project 8, we are part of the He6-CRES collaboration which is developing the Cyclotron Radiation Emission Spectroscopy (CRES) technique for broadband use (i.e. over a wide energy range). The CRES technique leverages the fantastic precision of a frequency measurement with the fact that particles of charge q moving in a uniform magnetic field, B, emits cyclotron radiation with a frequency f∝qB/(m+E/c2), where m is the particle’s rest mass, E is its kinetic energy, and c is the speed of light. By measuring the frequency, we can deduce the initial energy to better than a part-per-thousand, allowing unprecedented precision in measurements of the β’s energy spectrum. Our goal is a 20× more sensitive measurement of the Fierz interference parameter which, if non-zero as the SM predicts, would be a clear indication of BSM physics; if no signal is seen, our limits would be more precise than limits from the Large Hadron Collider.