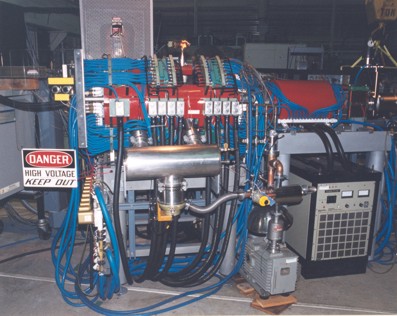 The ions that are accelerated by the Texas A&M K500 cyclotron are supplied by an electron-cyclotron-resonance (ECR) ion sources. The ions are positive; that is they are atoms that have been stripped of some of their electrons. The cyclotron can accelerate to the highest energies those ions that have the fewest electrons remaining and thus the highest charge. To do this the ECR ion source uses magnetic fields to trap plasma in an evacuated chamber. The plasma is formed from a gas or from some otherwise volatilized material. Solid materials can be introduced into the plasma, where they are subsequently ionized, by using an oven (e.g., aluminum) or by high-voltage sputtering (e.g., uranium).

Plasmas consist of positive ions and negative electrons that are strongly affected by magnetic fields. In the source the magnetic fields, produced by both electromagnets and permanent magnets, are at their weakest in the center and at their strongest near the walls of the plasma chamber. The high fields surrounding the volume of plasma tend to reflect escaping charge, helping to increase the density of the plasma. Individual ions will remain within the plasma for several tens of milliseconds.

Long lifetimes of ions within the source allow for higher and higher ionization through impact with energetic electrons heated by microwaves via ECR. At a microwave frequency of 6.4 GHz, which is the frequency the ECR Ion Source uses, ECR occurs at a magnetic field strength of about 2.8 kilogauss. The ions are eventually extracted through an aperture at one end of the plasma chamber by imposing an electric field of about 3-4 kilovolts per centimeter between the plasma chamber and a grounded aperture called a puller.

A second ECR Ion Source is used to supply ions to the re-commissioned K150 cyclotron. This ECR ion source works by the same principles as the one used to supply the K500 cyclotron but the fields are much higher so that the plasma confinement can be much better. The frequency of the primary microwaves is 14.5 GHz, but microwaves with frequency as low as 6.4 GHz can be added. Higher plasma confinement and more heating leads to higher plasma densities, to hotter electrons and to higher ion lifetimes with the plasma, leading to more intense beams of more highly charged ions extracted from the K150 ECR.

A postdoctoral position is available at the Cyclotron Institute.  Review of applications will begin on December 1, 2021.